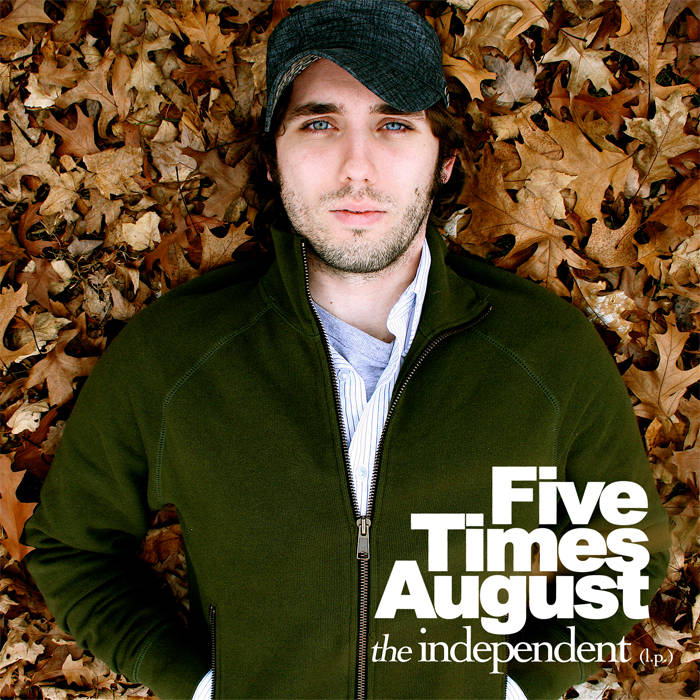 "The Independent" was the first album in history to be sold in Walmart stores nationwide without any kind of record label support, indie or major. The track listing duplicates the 2005 release "Fry Street," on which every song had been licensed for TV, Film, and Commercial use. It also includes three extra bonus tracks. Because of it's success, "Fry Street" was reissued in 2007 with new artwork and album title as "The Independent."

Track Name: First Time For Everything
FIRST TIME FOR EVERYTHING

I’m standing in the place we met
Heart shakes, and then I sweat
It’s so hard to see that it’s all over

What did I do to make this end?
And could I really be your friend?
I can barely just pretend it’s over

I’m standing in the place we first kissed
There’s so much I miss
This I can’t resist cause I’m all over
Where we took our first photograph,
And where I first held your hand and laughed
Awkward moments like that have passed, it’s over

I’m standing in the place we first said goodbye
I don’t know why, I so relied on you for my smile
I laid happiness in your hands
And I don’t really understand
The cost was more than I could stand
It was miles wide

So maybe I’ve got a lot to learn
Or maybe I’m just hanging on my words
Or maybe it’s not a big concern
But if I raised my hand
Would I understand why I’m better with you?

(bridge)
So tell me where did I go wrong before you
Before you came along
Well, it seems like I was lost
You showed me how to do things right
Now I’m so glad that now you’re mine

So let me say it all again…

So maybe there’s not a lot to do
Or maybe I’m just making myself confused
Or maybe I’ve got nothing to lose
But if I get out of line,
Just tell me you’re mine,
And how I’m better with you

(bridge)
(chorus)
Track Name: Save It For Later
SAVE IT FOR LATER


Look at me, do you see anything you want?
I do, when I look at you
Three words unheard
A verse that I should say to you
But there’s just no use

(bridge)
And I want you,
And I need you,
And I don’t think I could leave with this in mind
So oh this time
I’ll say the wrong words
And you’ll move onward
Cause I’m a coward
I don’t know how to work this out

So look at me, do you see
That everything you want is here?
But it’s far from near

ooh tonight
ooh tonight
Well I tonight, deny that I
Had never really tried
To get a three word line to you
Track Name: So Typical
SO TYPICAL

And so, for everything, I’m sorry
It’s so typical, don’t worry about it

Filling in the outlines
Of memories that we could never draw in
Then running in these circles
Will make us dizzy, we’ll just keep on falling

And so, for everything, I’m sorry
It’s so typical, don’t worry about it

We just need to situate ourselves
Get away, just evacuate this hell
Maybe take a short vacation
A little rest and relaxation
Could never hurt all for something so typical

Wherever you want me,
Whenever you need me
I’ll be waiting for my time to go
Whatever you’re asking
There’s no need to ask it,
I’ll be on my way to get it done

So I’ve laid it on the line, do you need a little time?
I guess I could understand that
It’s a lot to take in you wouldn’t know where to begin
But you won’t need to ever look back

Wherever you want me,
Whenever you need me
IWhatever you’re asking
There’s no need to ask it,
I’ll be on my way to get it done

Wherever you want me,
Whenever you need me
I’ll be waiting for my time to go
Whatever you’re asking
There’s no need to ask it,
I’ll be on my way to get it done
Track Name: Up To Me
UP TO ME

(It’s up to me)
And I’m still hoping
For you to hold me
To let you go
But for all you know
I’m already gone
Track Name: The Way You Do
THE WAY YOU DO

So maybe I'm just a photograph for her to laught at
Seems that I don't want her back, I do

Seems to me a little bit crazy
Hard to think I'm in the middle of a maze
But still I feel a little real killing time
Seems to me a little too hard
I jumped the gun and I ran too far
And slowly I feel too
I feel the way you do
Track Name: Owe It All To You
OWE IT ALL TO YOU

Sunshine looking over my head
Where do I go? What do I know?
Moonlight breathing down my neck
Whispers let's go, baby let's go

It was a lonely day til you arrived
And the sun came up to light by eyes
Now everyone keeps asking me
Why am I so happy and I'll say..
That I love you and all the things you do to me
I'm suddenly finding my own sanity
And I owe it all to you

Flash back then I start to back track
Where did I go? Why don't I know?
Too bad it's looking at the days when I had thought I had it all
Now I'll only get to places where I can't remember faces

And I'll say that I love youand all the things you do to me
I'm suddenly living my own fantasy
And I owe it all to you
Track Name: Do It Again
DO IT AGAIN

So you got what you want out of me
Took me for the ride but you never bothered saying goodbye
No return, I burn
Everything you learned put me in detention
Now you’ve got so much attention from me
But I’d do it again

You’re the center of me
And you’re a sinner in me
A saint in the wait, but the weight keeps bringing me down

Cause how you leaned on me
And how you’d sing to me
That’s what you mean to me,
And it’s perfectly you

And You’re the end of my nights,
The starting thoughts at sunrise
You’ve got me changing but the same things are holding me back

But what I do, it’s all for you
It’s understood you don’t like the change
But don’t leave me out, I want you now
I’m sorry how I can’t turn you away
But you’re worth so much, a priceless touch
And I worry, when you’re not perfectly you
Track Name: Roll Into You
ROLL INTO YOU

What are you waiting for?
I couldn’t want you more right now
I’ve never felt so unsure
All signs point in your direction
Start it now, lets get this perfection rolling

And I’m great
I hope it’s not too late
We’ve been weaving out and in all night, wasting time
So do you feel like I do or do you just feel like you?

What are you waiting for?
I couldn’t want you more right now
I’ve never felt so unsure
All signs point in your direction
Start it now, lets get this perfection rolling

And in my mind I know it’s fine,
I know it's time to make it right
But you don’t seem to see the signs
So I guess the only thing is to put it all on me

What are you waiting for?
I couldn’t want you more right now
I’ve never felt so unsure
Cause all signs point in another direction
All my affection was for rejection
I’m rolling to you
Track Name: Side 2 (bonus track)
SIDE 2

One stop into the record shop - I need you
Your melody is tellin’ me that I’m in blues
Isle 5 is next to your mind, got a wide selection, I can’t choose
So what do you say? Let’s get away, the radio’s playing “I’m with you”

So go on and love me like the needles starting side 2
A new groove, it’s in you much
But your dust sleeve says don’t touch me, so you’re not leaving now
And you tease me, would you release me on my own Tuesday with you?

So back into the moment when I saw everything I wanted in you
From a cover design that flows my eyes to a back side that blows my mind
So much information, no need to use my imagination, listening station here I am
Gona find out what you want, what I’ve got, can I afford a little more, the import version of you?

So go on and love me like the needles starting side 2
A new groove, it’s in you much
But your dust sleeve says don’t touch me, so you’re not leaving now
And you tease me, would you release me on my own Tuesday with you?

Bandcamp Daily  your guide to the world of Bandcamp